Seems like a mouthful “able catch pantry pest moth trap tab wing hooks”, but you can shorten it to ‘moth trap tab hooks’, ‘tab edge wings’ or just a plain ‘wing tab’.  What we are describing is the novel placement system integrated into the Able Catch Moth Trap.  Let’s take a look at why wing tabs were created, and how you can deploy the ‘tab wing hooks’.

It’s no surprise that adult Plodia interpunctella (Hübner) Moths have wings.. These pantry pest moths get around by flying, not as much by walking.   At Traps Direct the moth traps engineers wondered why so many moth traps just sit at walking level on a shelf (wasting valuable shelf space) rather than bringing the trap into the air, where the moths are flying.

Sure, a home owner with a moth infestation could use duct tape to put a moth trap at any height they wanted, but duct tape is not very elegant, and it doesn’t remove cleanly.   So there was not going to be a recommendation to tape a moth trap up somewhere.  Instead the novel idea, was to enable the moth trap to be attached to something, rather than just sit on a horizontal surface.

There were ideas that used complicated twists and turns and an instruction manual, but in the end focus groups found these origami type placement mechanisms to be too complicated..

In the end, the designers looked at the Tab end of the moth trap, that was used simply to hold the trap together (ie insert TAB A into SLOT B).  After the TAB is inserted through the SLOT , why not use the tab to enhance the moth trap placement options.   At least 15 designs were considered, affecting the width of the TAB, shape of the TAB, even the TAB height were all evaluated, and the current design won out.   More can be found in “Moth Trap Tab Hooks – Evolution of the Tab Wing Hook”

Once the TAB has been moved through the SLOT,  the trap is ready for use.
Notice the TAB is not solid, but has a dip in the center giving the TAB the appearance of wings ( echoing back to the moth itself).   Both the left and right side are mirrors of each other and the individual components of the tab wing vary in color and shading (this is true on both the Front and Back of the moth trap). 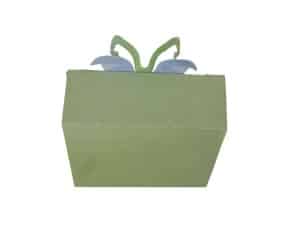 The outer 1/4″ wide edge forms the wing and can be bent out 1/2″ ( folded at the point where it becomes a shade darker) forming a short wing.  At that point there is a small tear bar, that once broken allows the wing to deploy an additional 1/2″ longer forming a long wing.

There are 3 placement options available with the Wing Tabs:  Tuck , Hook and Loop.

Because the Able Catch Moth Trap is TAB assembly is inline with the back of the trap, it can be tucked under or into many gaps, while the trap remains flat against the surface.  (This is not possible on some triangular moth traps).  TUCK placement focuses on a friction hold.  The most common of which is a light or plug cover.

Wing Hooks are used to hang the trap from a shelf, door frame, mini-blind, picture or lamp shade.  Using the short wing you can attach to most surfaces.  But depending on the depth of the picture frame, or thickness of the wire shelf you may need to deploy the long wing tab hook.

When the long wing tab hook is just not long enough, you can cross over both long wings catching the notched inside edge forming a large Loop that leverages the notch in the tab to be able to loop around up to 1″ diameter rods.   The Loop can also be used to loop a moth trap onto a drawer pull, or a cabinet handle, as well as even a pull chain on a ceiling fan.

Brought to you by: DIY Pest Control Traps 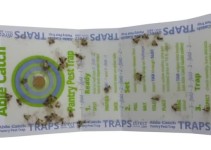 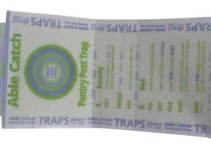